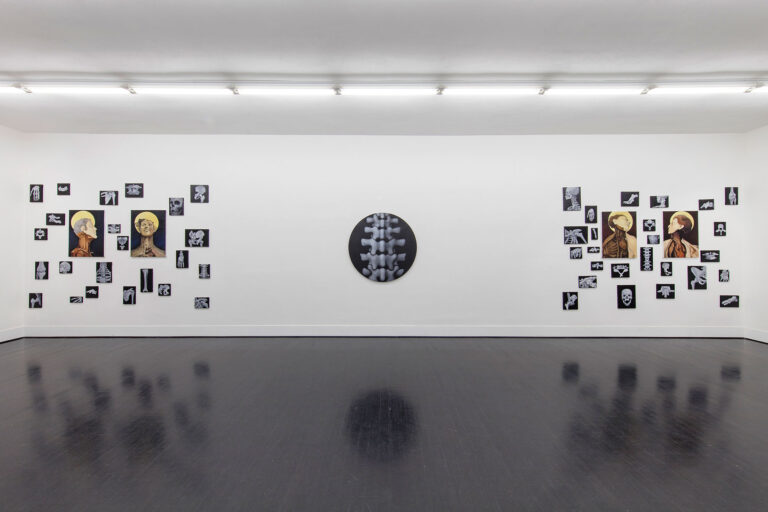 This exposition, curated by Chiara Guidi, is a completely project by the visionary artist that has been specifically designed for the Galleria Pack space.
By altering the painting classical installation rules, Bodino has sought to create a sacellum, a sort of sacred enclosure of paintings, a large niche of an emblematic art collection set among anatomical subjects and portraits. The exhibition setup has been conceived to be like ancient crypts and has been created to be transformed in accordance with aesthetics that are properly those of the vanitas, into a hypothetical celebratory chapel. Bone Machine is an exhibition that has been constructed as if it were a dramatic feature film, where individual images are directly confronted with history and more precisely with the great chapter of the Natural History of mankind, typical of Eighteenth-century culture.
The starting point is Florence’s Museum of Natural History, La Specola, a compendium of anatomical science par excellence, and this is precisely the history to which Bodino refers in order to pay his homage. And more precisely, it was its famous section of wax anatomical models, with their unsettling appearance but which were fundamental for the development of medical science, which led the artist to the rewriting of exposed bodies. In his rereading, through a peculiar representation carried out in oil on canvas, while maintaining an apparent scientific connotation made of crudeness, with the connective tissues and quite visible organic parts, a renewed gallery of portraits is generated that assume a mystical-type sacredness. Parts of the faces highlight the muscle tissues, or reveal their internal organs, in a transfiguration that transforms them into martyrs with a golden aura, all with the figurative attribute of the nimbus, a flat halo, a circle of light, emblematic and typical of ancient medieval representations.
The iconography of the skull, that has become so widespread in contemporary arts, is merely a mention here, compared to more than one hundred pieces on display. They are canvases varying in size from the tiniest format to the large size that faithfully bears witness to the total sampling of an Eighteenth-century ossuary: long, spongy, flat, short, angular bones; odd and even bones; convex-shaped bones; bones with hollowed, flat, thin, laminar surfaces; where, among the skull, the rib cage, the atlas, the sacrum, the phalanges, the ribs, the vertebrae, the sternum and the torso, the skeleton appears to be dissected and returned in a real catalog of anatomical tables in black and white sometimes with macroscopic details that, in their decomposition, take on a new value.
From reality we then switch to abstraction. An example is the spinal column, the keystone of the exhibition, which was represented in a large tondo as an endless column of a Brancusi-like matrix. Each part of the skeleton is painted not only to have knowledge of it, but also to reconstruct a symbolic place of observation and reflection. Lighting is a crucial element in the Bone Machine installation, and is that of the light of meditation, in fact it is candle light. An authentic Bachelard like reverie to make the environment crepuscular and, to suggest both contemplation as well as the renewed primary Cartesian emotion. A wonder to ignite a reflection on our life that is so alien from the concept of death, but so immersed in the cult of the body, a body without bones and lacking in holiness that Giampiero Bodino wants to redeem and return in this cycle of Bone Machine paintings.
The title of the exhibition is a tribute to the 1995 Tom Waits’ album of the same name. 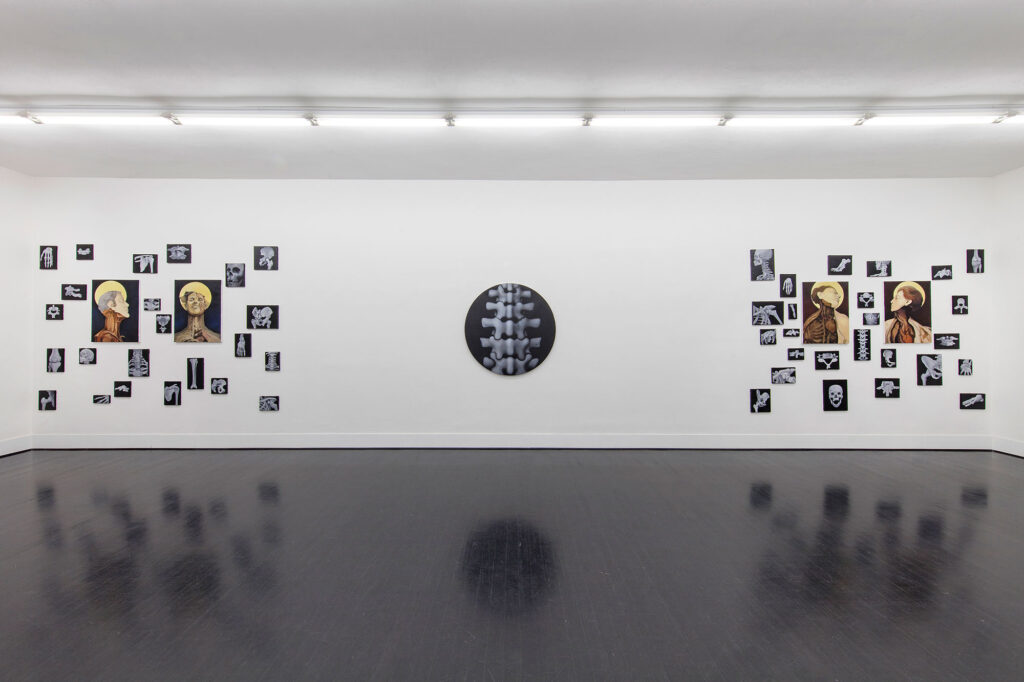 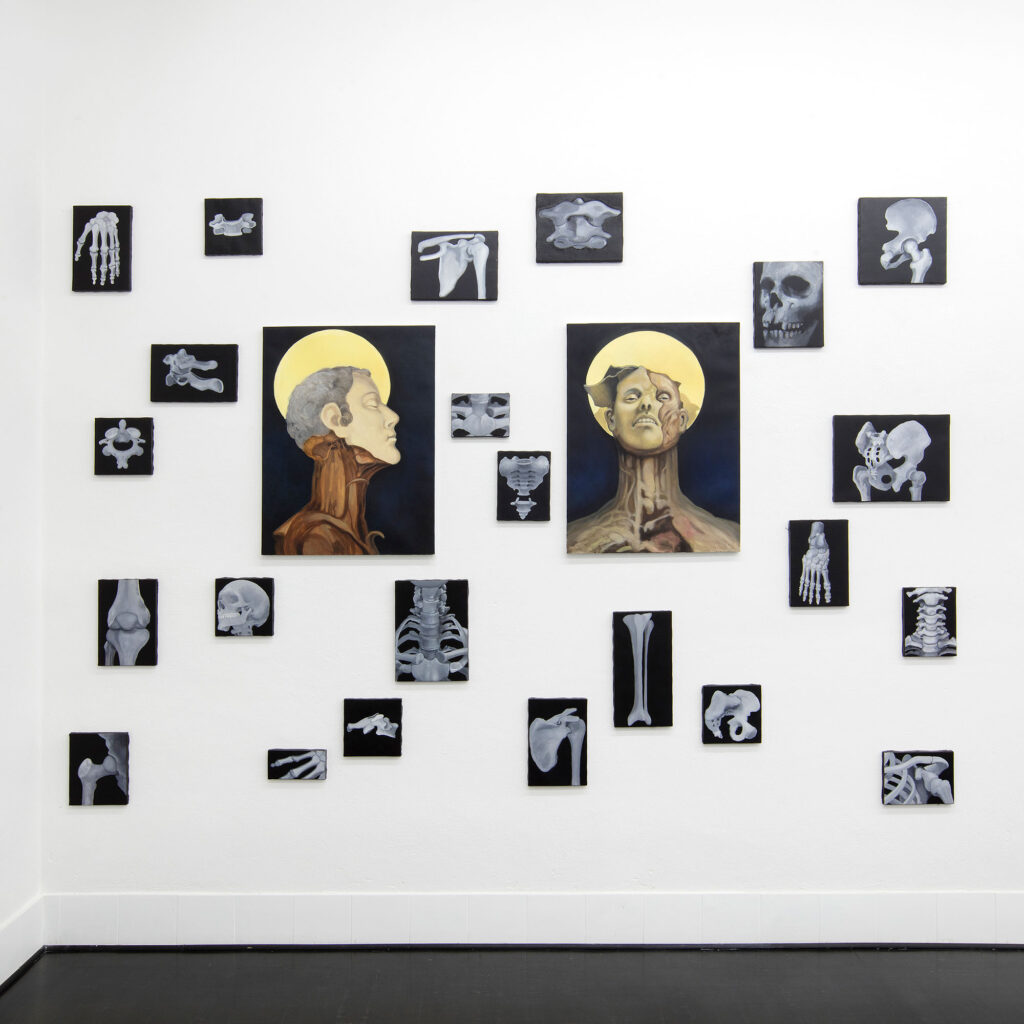 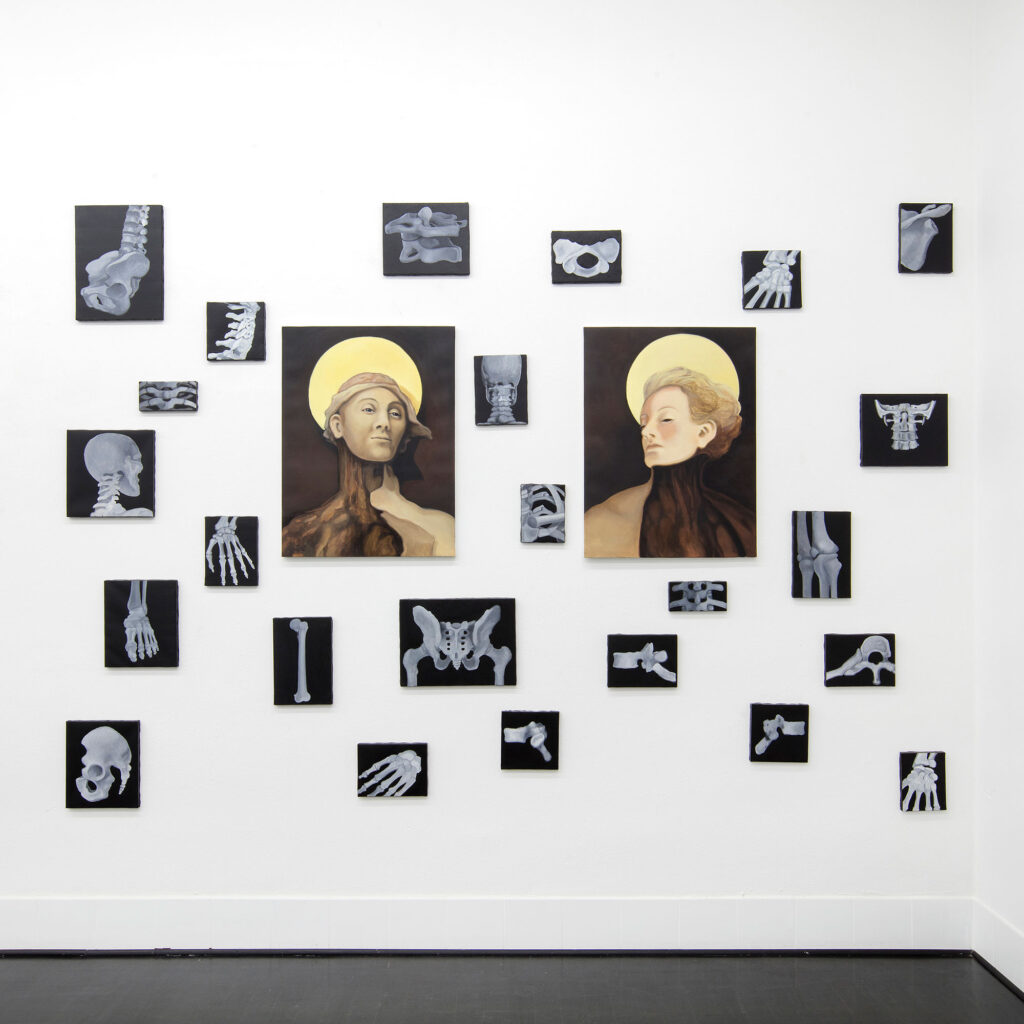 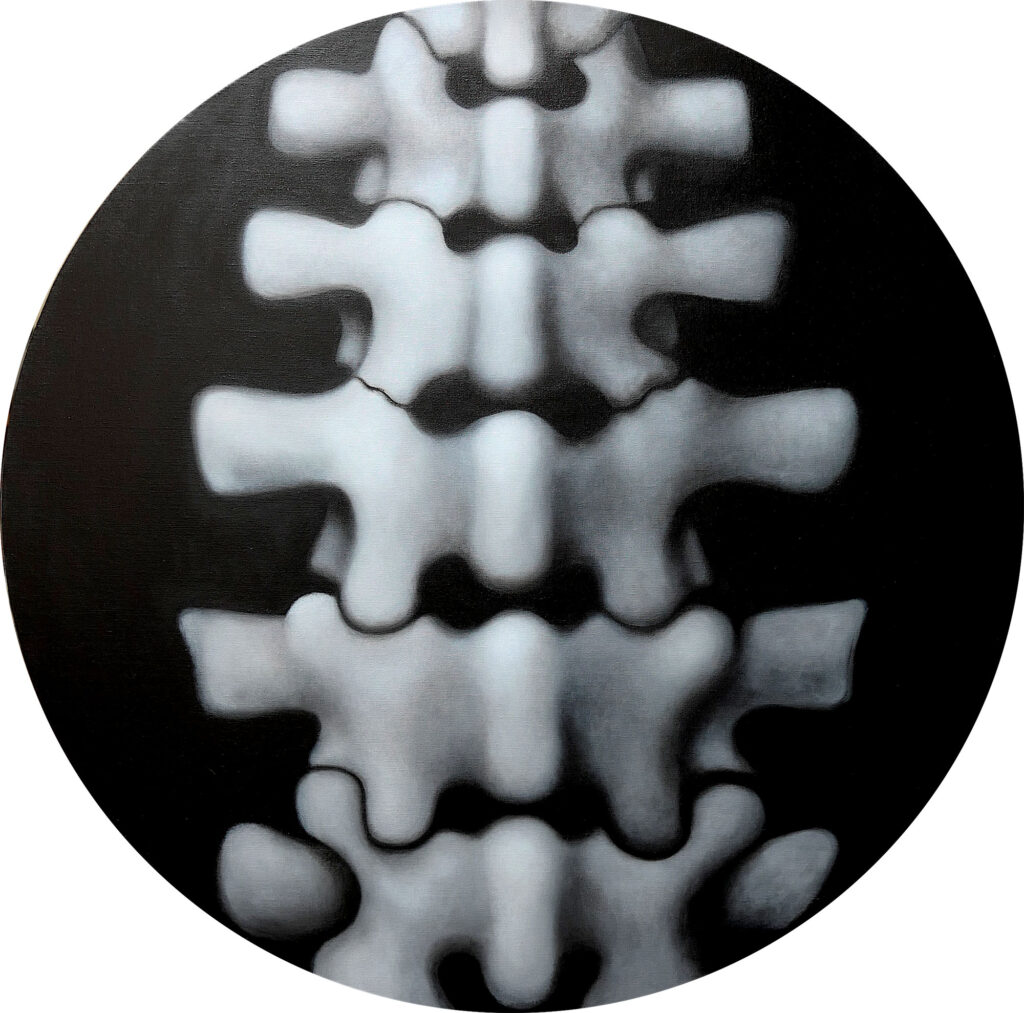 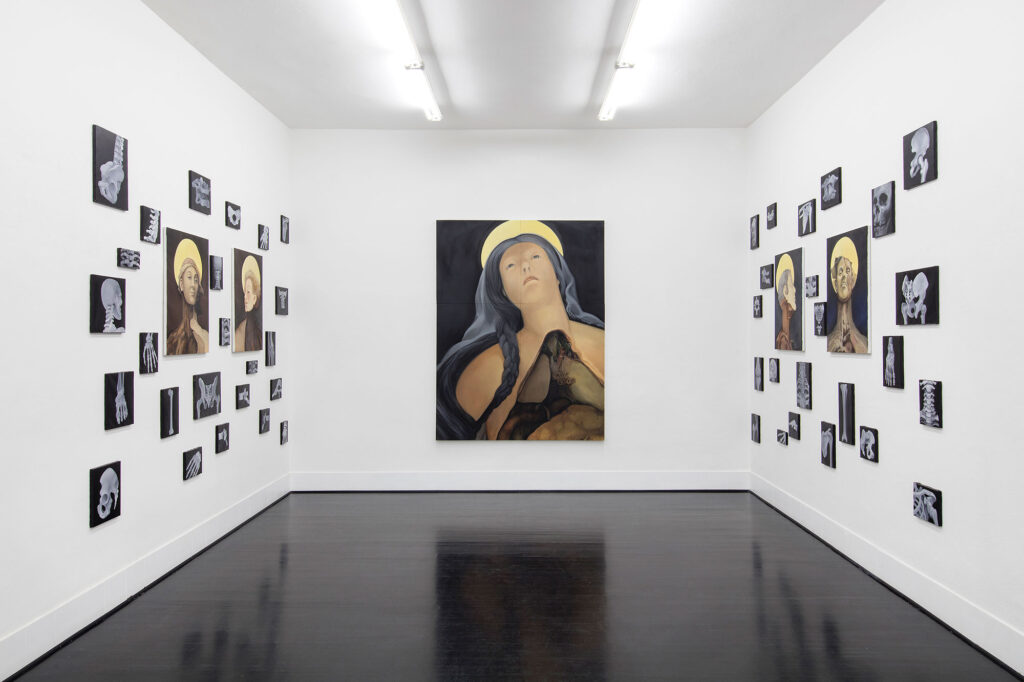 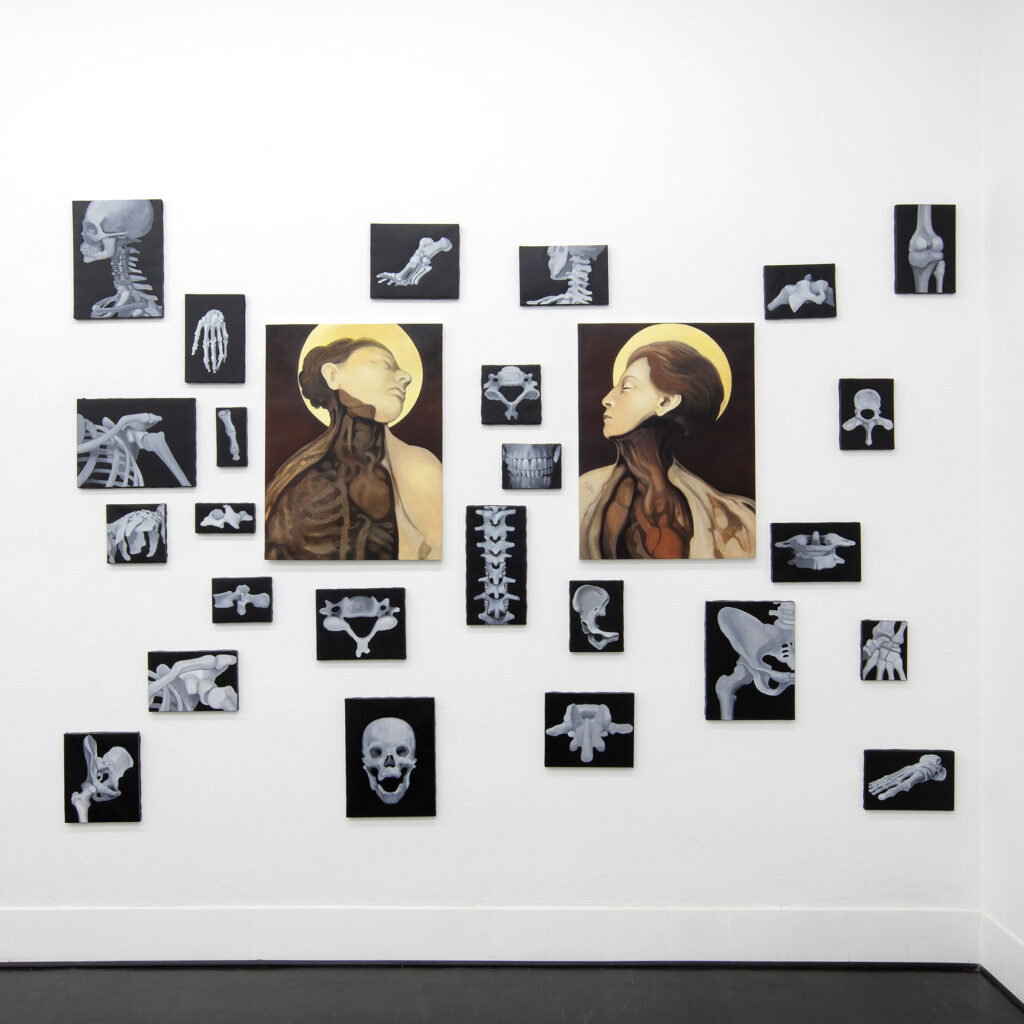 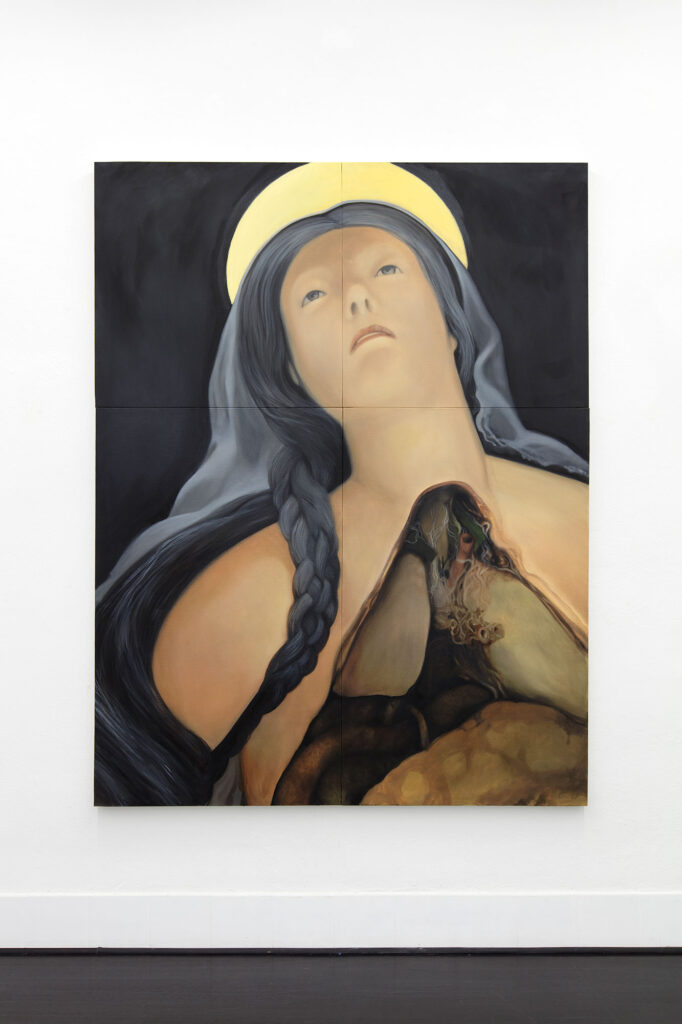 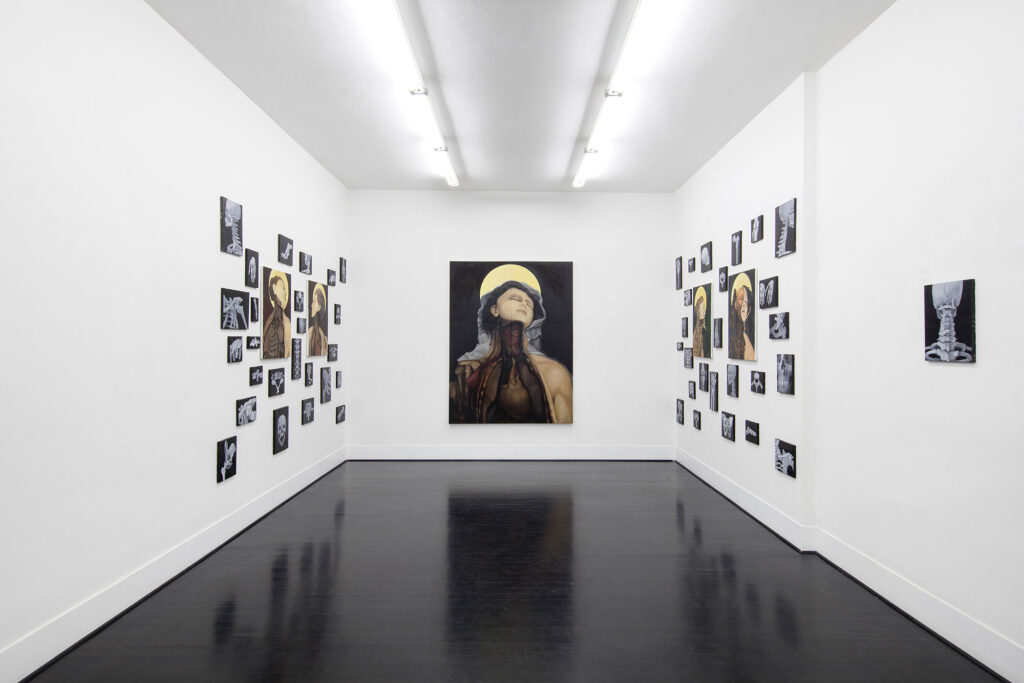 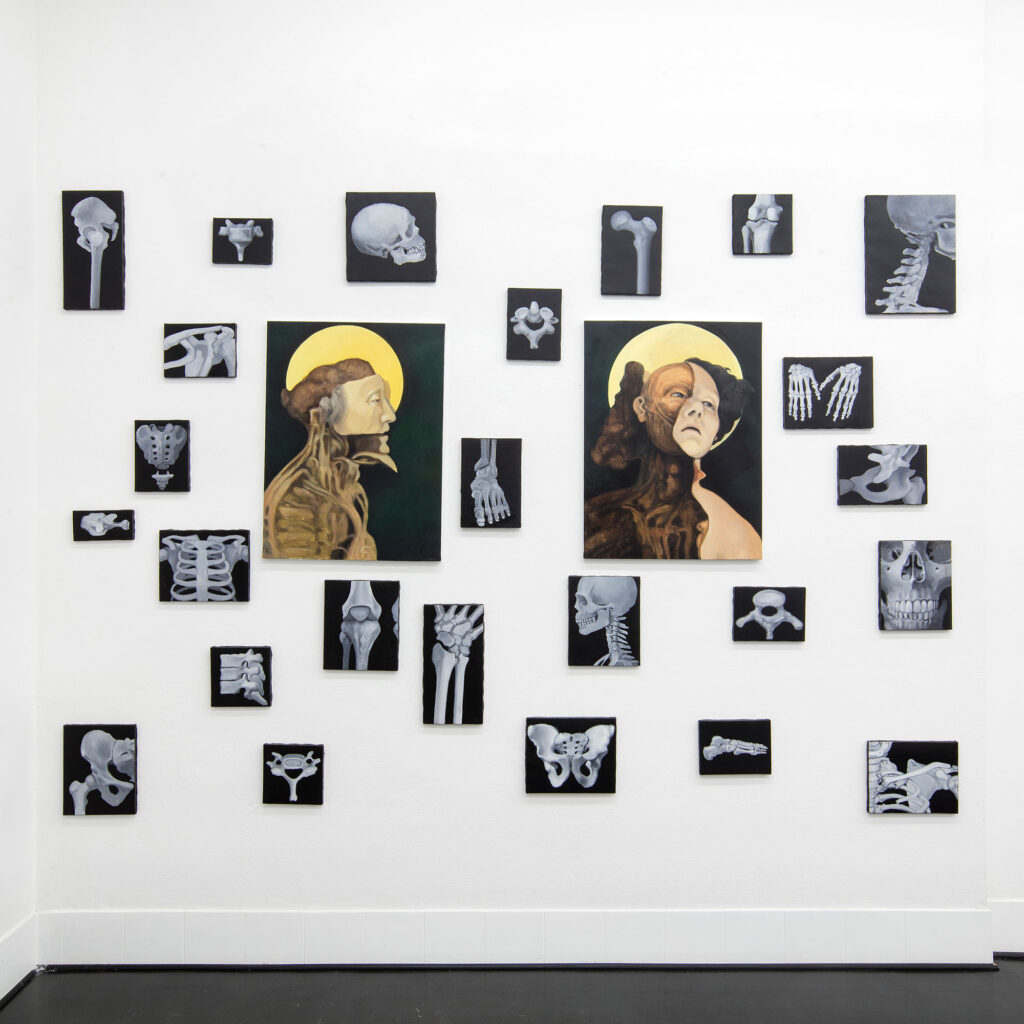 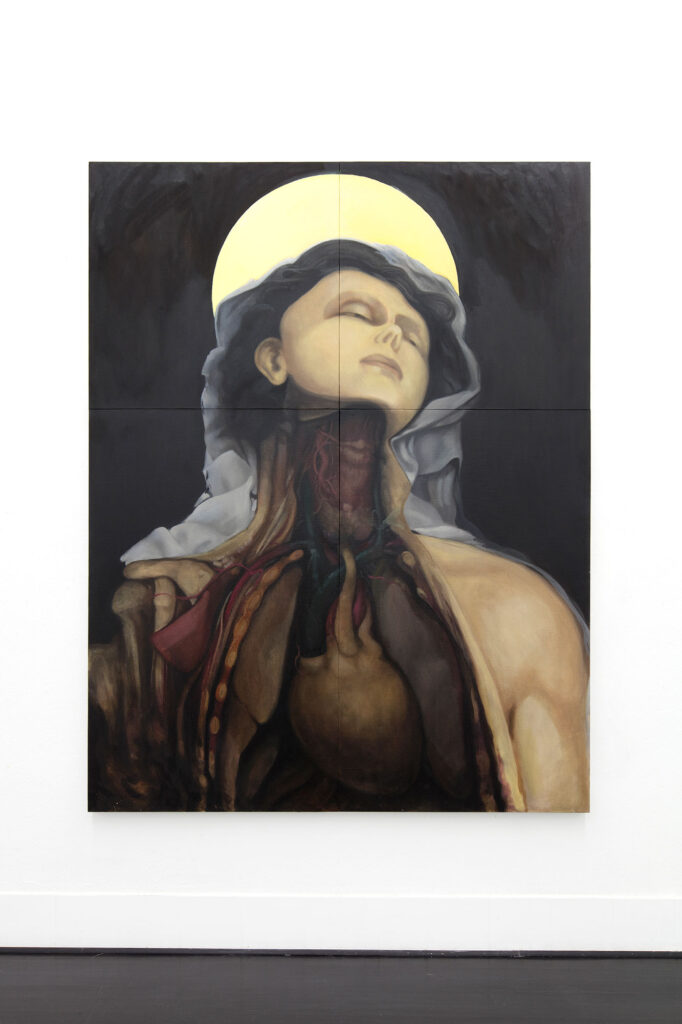 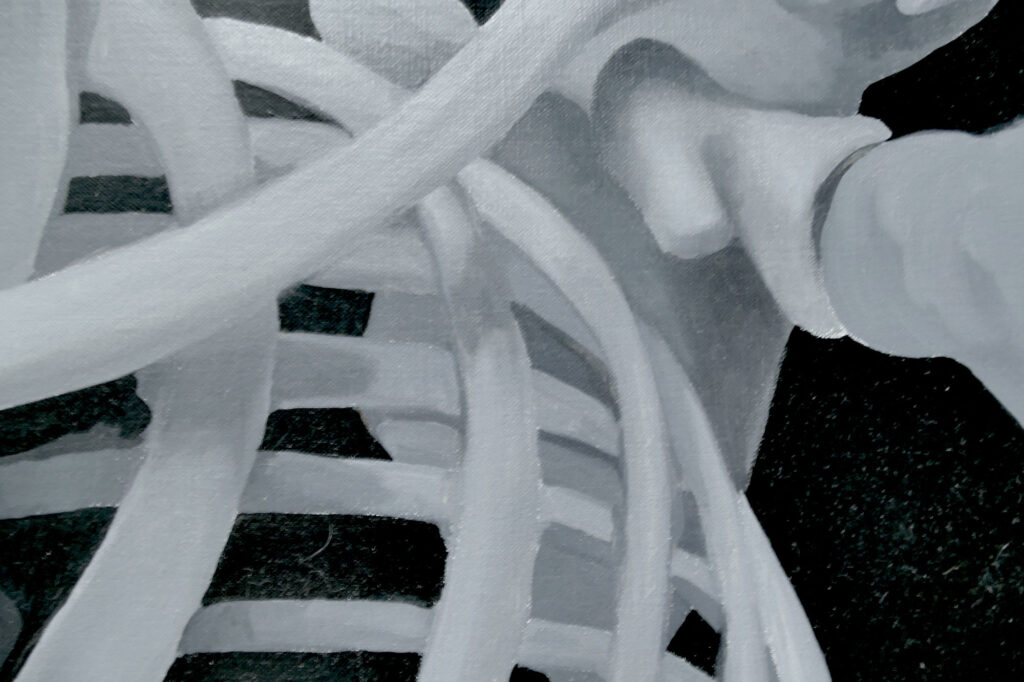