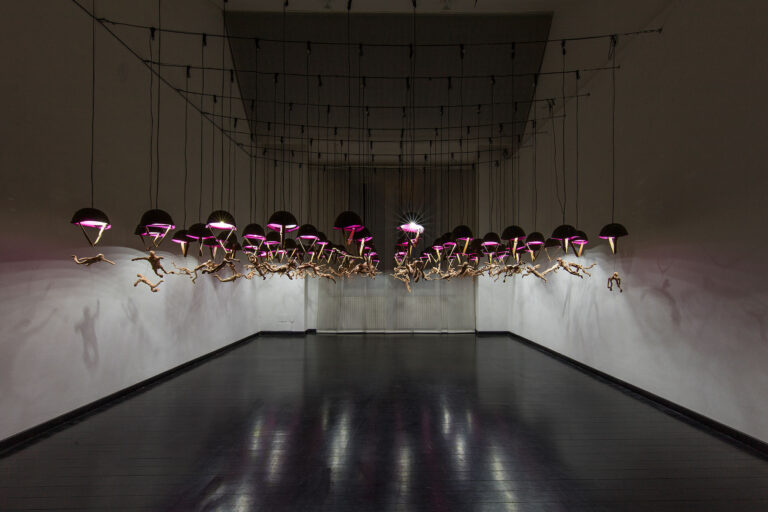 Light through a grid and a helmet-parachute – these ambivalent images predominate in the project by Oleg Kulik, the Moscow actionist, performer, sculptor and artist.
The three sculptural installations in ‘Grid’ reproduce Soviet-era window bars in which the prevailing motif was a semicircle with radiating rays. The same ‘sun’ often figured in criminal tattoos and symbolised the ‘North’ (where the sentence was served), resilience and aggression. Here Kulik forces a corporeal putty through lattices welded from metal bars. Two fists grip the bars of an enclosure. A man’s back presses against the metal grid and two more fists grab the bars above – what is this? Love? Violence? Pain? The third grid is even more symbolic: a man’s hand with a dove clutched in the palm stretches through an iron aperture (as seen in cash payment booths and currency exchanges). At the same time this ‘bird of peace’ with a recognisably Putin-esque physiognomy pecks the human finger.
The grid referred to by Rosalind Krauss as an emblem of modernism allowed 20th-century artists to achieve a certain autonomy in their art, as distinct from Leonardo or Dürer, who superimposed a ‘perspective lattice on the depicted world as the armature of its organisation’. It seems that Kulik the performer has confined himself behind bars, presenting his naked and suffering body to onlookers in the manner of Catholic martyrs cast in the flames on such grids, or dragged through town for ridicule by the commoners.
The ‘Parachutists’ installation appears to convey a similar concept of ‘order’. The image of a military formation represented by rows of helmets is ruptured from within by figures of ‘little people’ suspended from iron cupolas. One hundred anthropomorphic sculptures were made not by professional artists, but by participants in Oleg Kulik’s art action, spectators that he invited to co-create in his Moscow exhibition project.
The ‘sculptor’ assembled the five-membered frame (head–arms–legs) from polymer clay in a very brief and strictly defined time period. Kulik positioned the action as therapeutic: viewers should transmit all the energy through their own fingers, expressing the pain of insult and betrayal. In this way Kulik hoped to overcome personal trauma and find a lifesaving parachute by organising a collective act.
In terms of plasticity ‘Parachutists’ was an experiment in the genre of ‘fast sculpture’. Spontaneous and in some instances even ‘automatic’ moulding revealed personal pain points, and demonstrated the limitations of the genre. ‘Parachutists’ became an original oxymoron: heavy metal helmets cast from a single template turned out to be salutary hemispheres for figures of dive se form, volume and plasticity. This installation was shown initially at the exhibition of Kulik’s new sculptures entitled ‘Our Mother’, while the rows of helmets appeared in the artist’s curatorial project on Socialist Realist painting from North Korea.
Here the question arises: what lies ahead? Does the homeland save its citizens with helmets-parachutes or, conversely, does it turn men into ‘naked bodies’ and ‘cannon fodder’, dispatching them to certain death? Are these people under the cupolas-haloes still alive, or corpses descending on us? Rebecca Horn presented a comparable dilemma of salvation-death not long ago on a Naples city square, where she placed metal-cast skulls illuminated from above by haloes.
Similarly Oleg Kulik’s grids and parachutes speak of personal and social issues, the rapid plasticity of sculpture and rigidity of welding, commitment to society and the betrayal of interpersonal relations, art and ritual, freedom and dependence.
Both projects are preceded chronologically and conceptually by the work ‘Eclipse’. This is the image of a divided man caught between ideology and physiology. The man goes forward, but looks back. Society as a whole is transfixed in this pose. The image develops in two directions: into the structure of ‘Grids’ or the bodies of ‘Parachutists’. 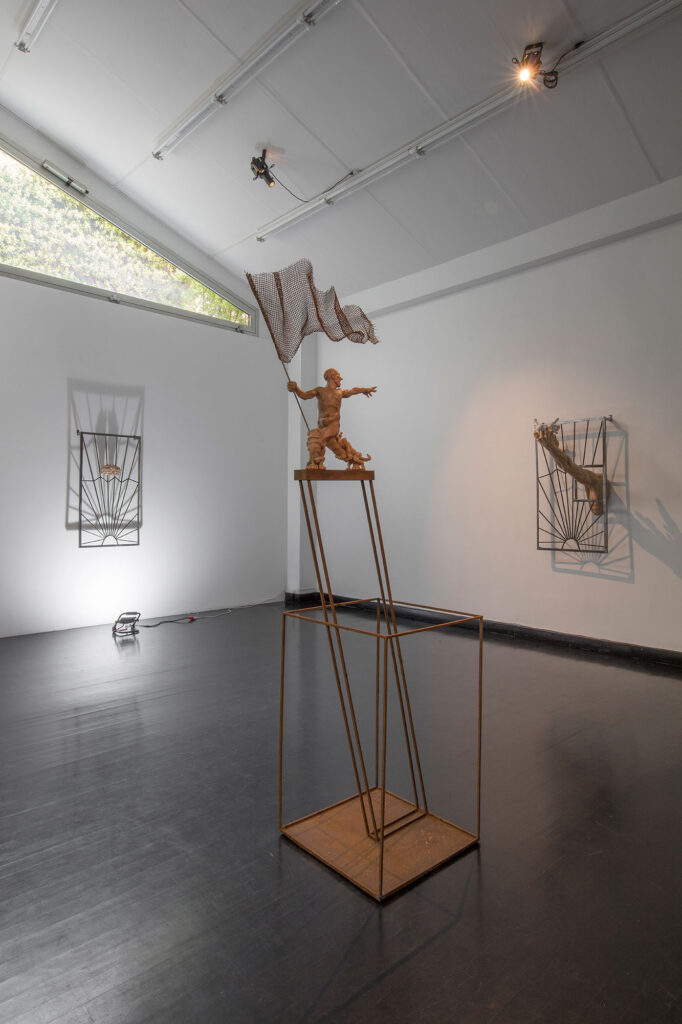 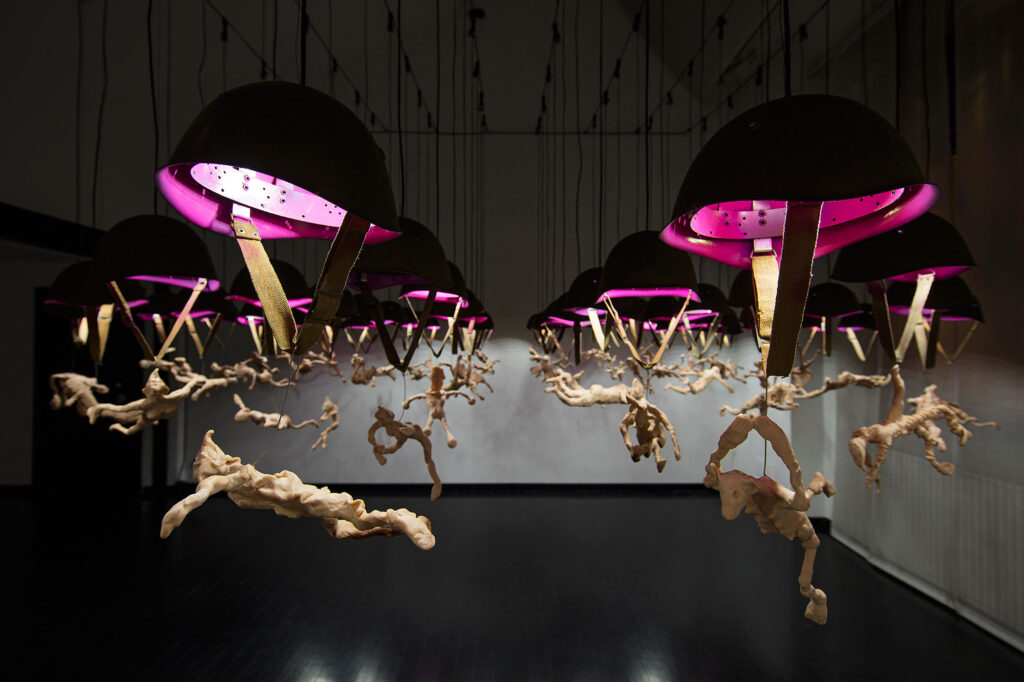 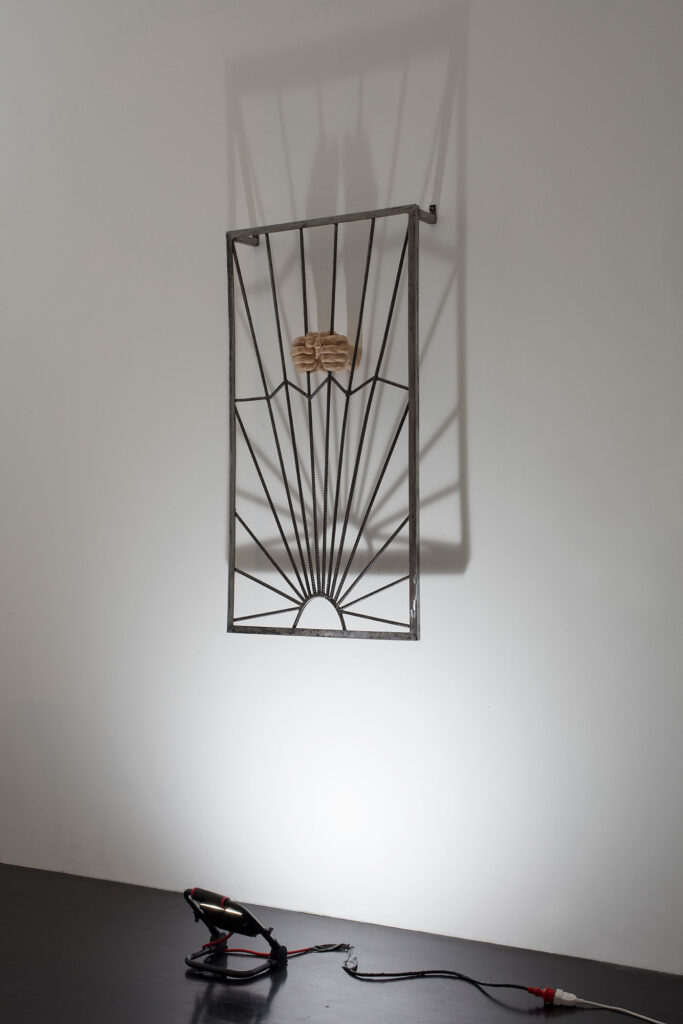 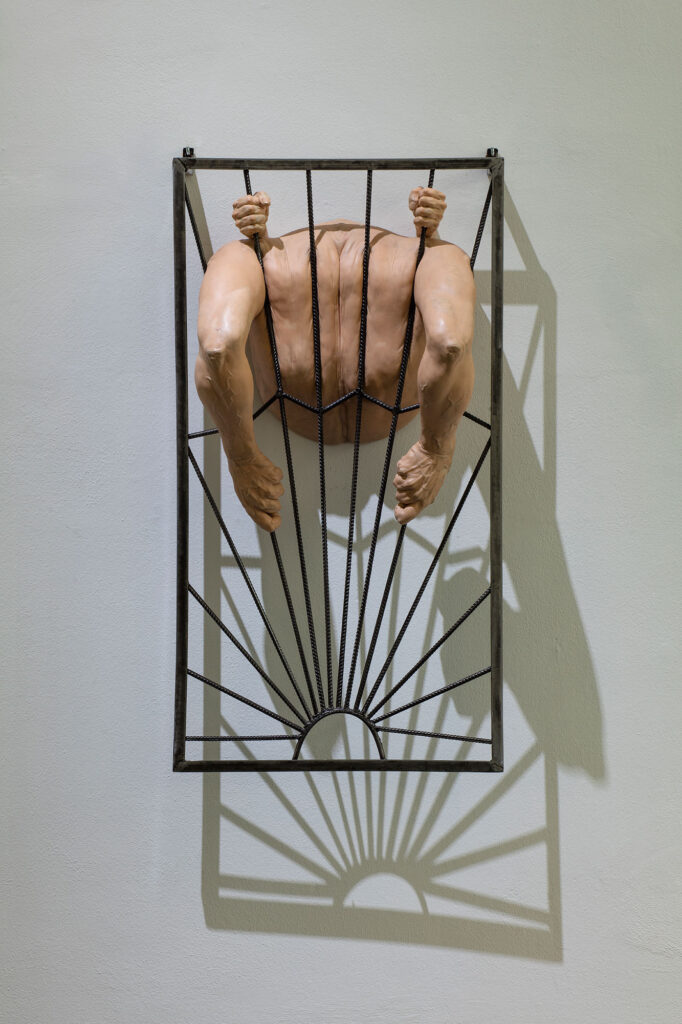 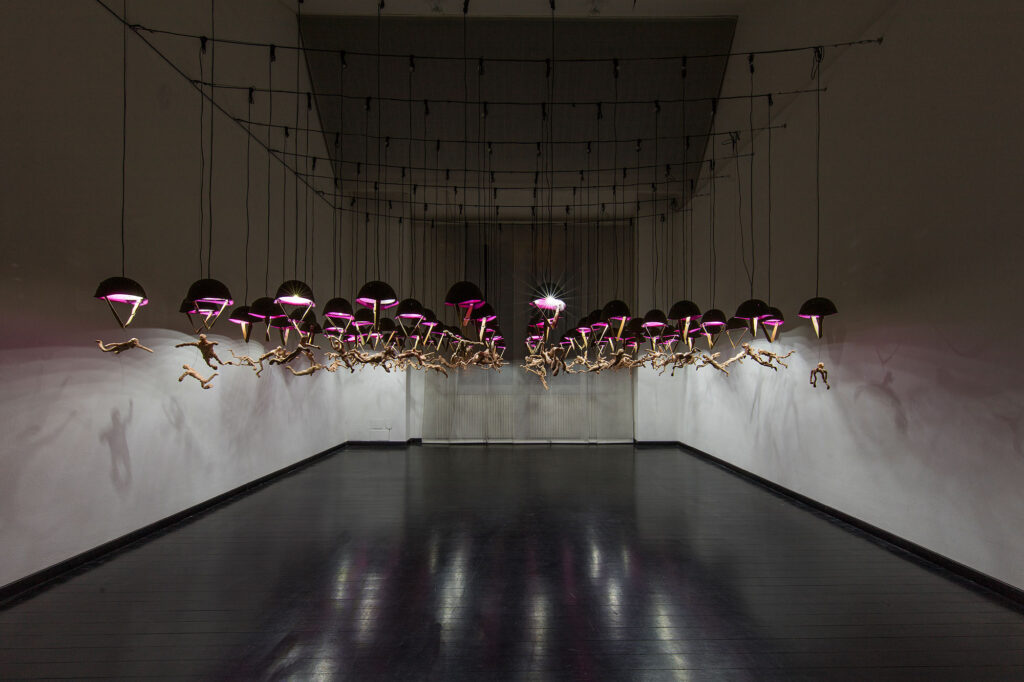 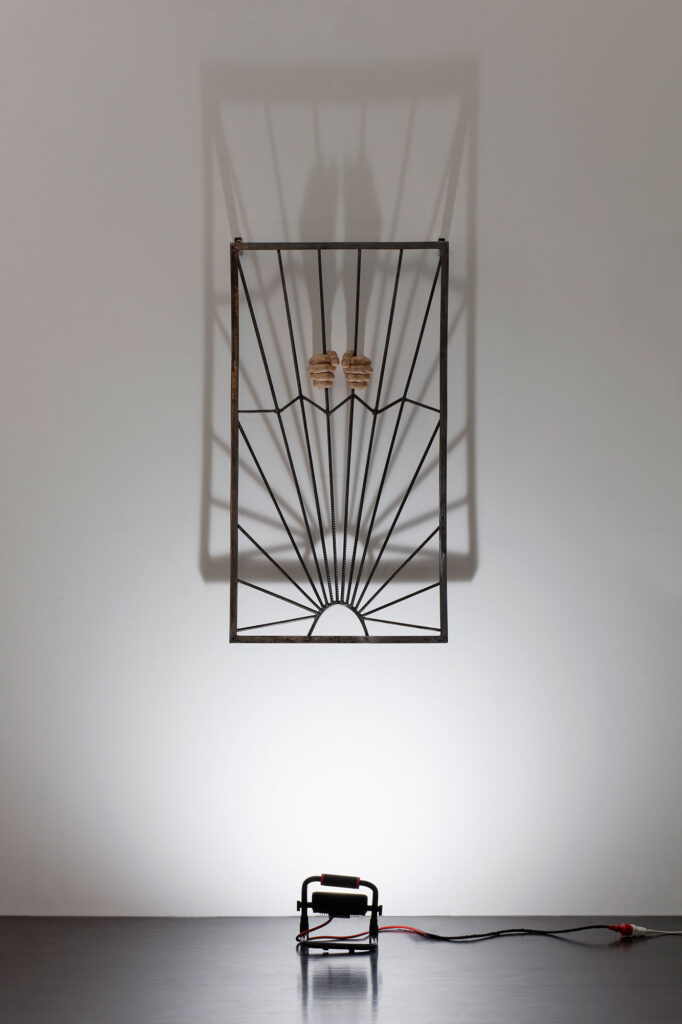 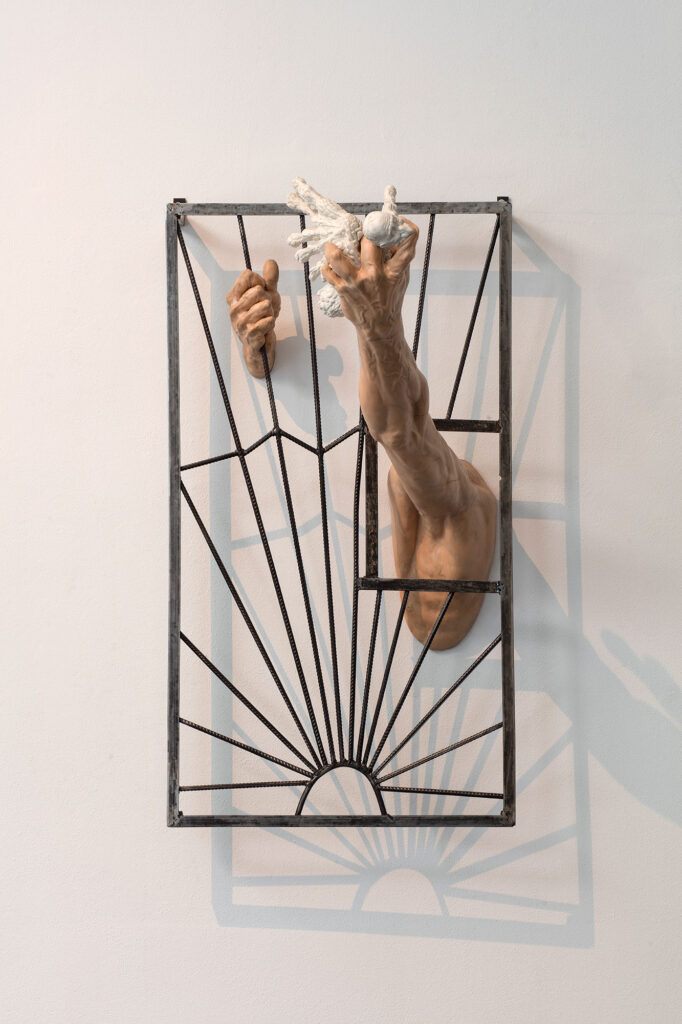 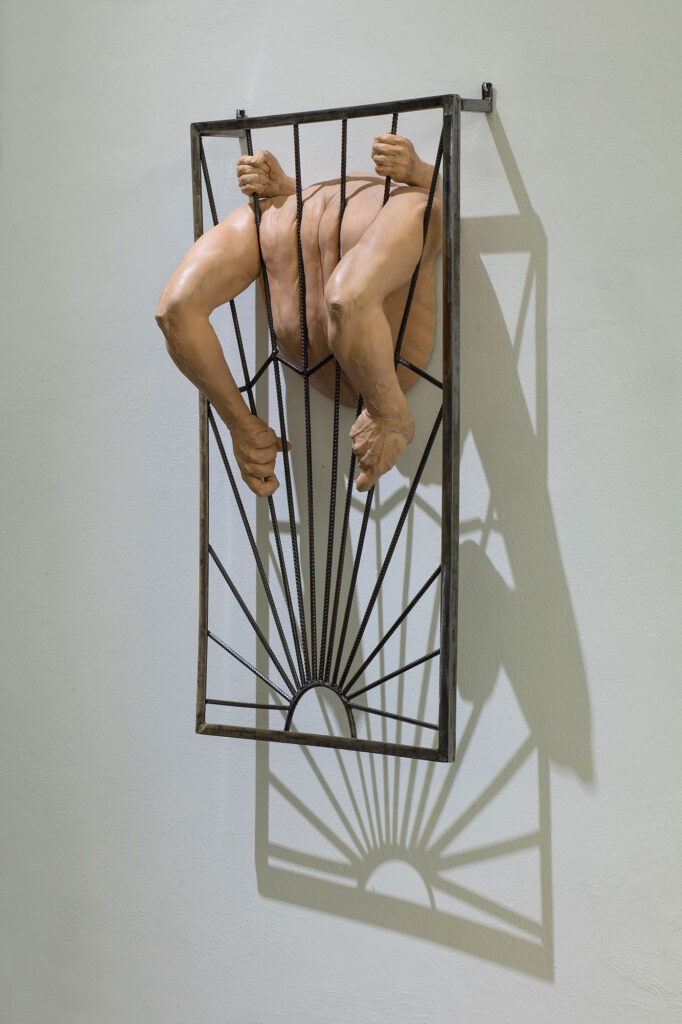 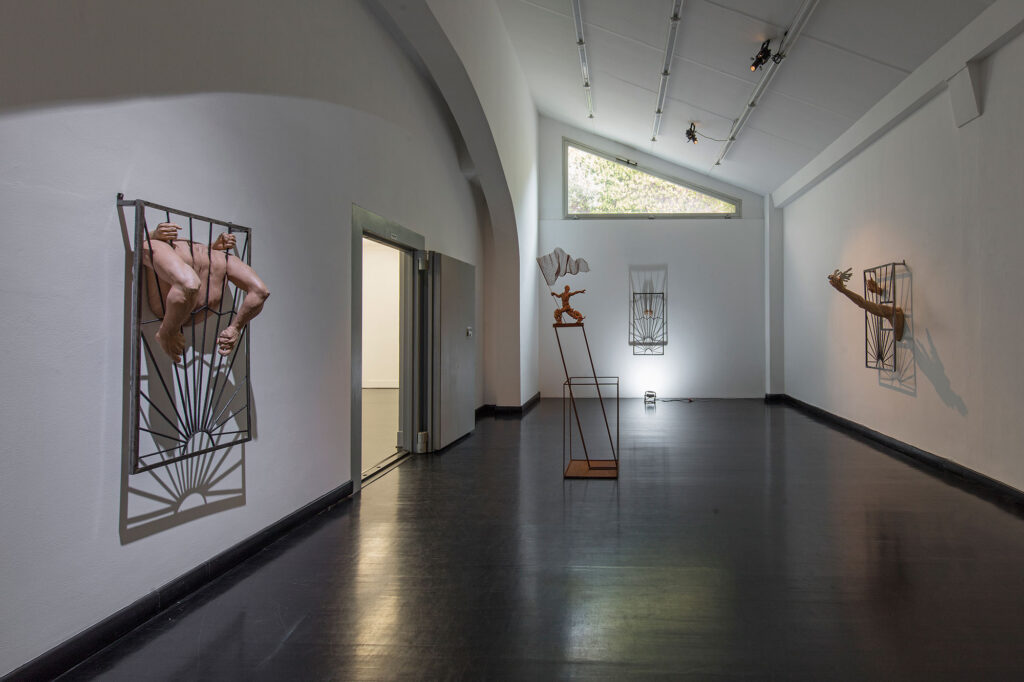 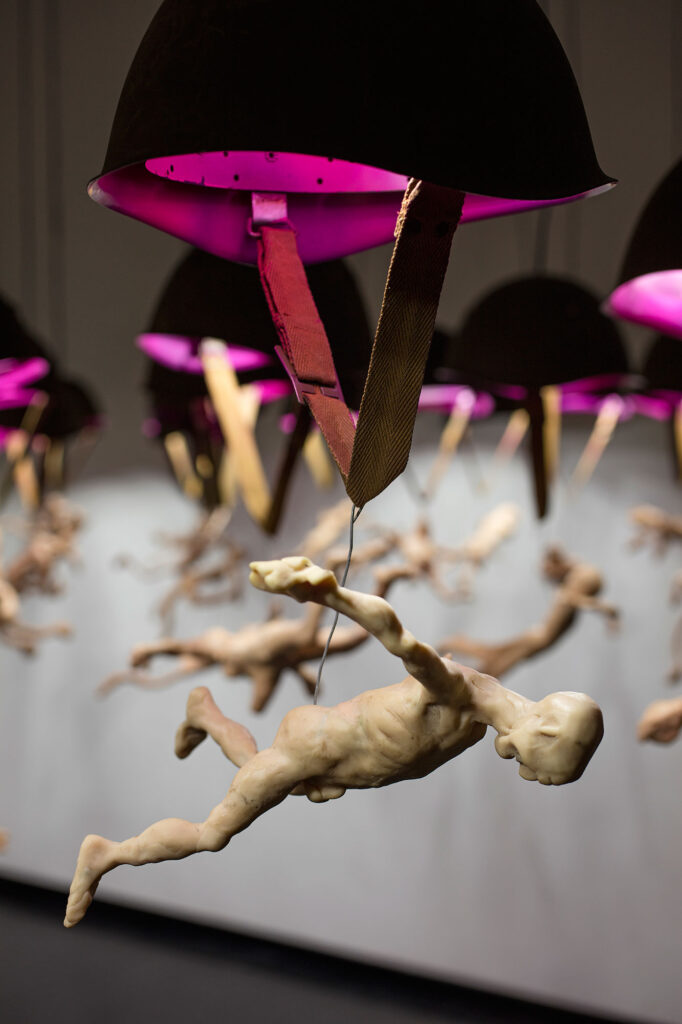 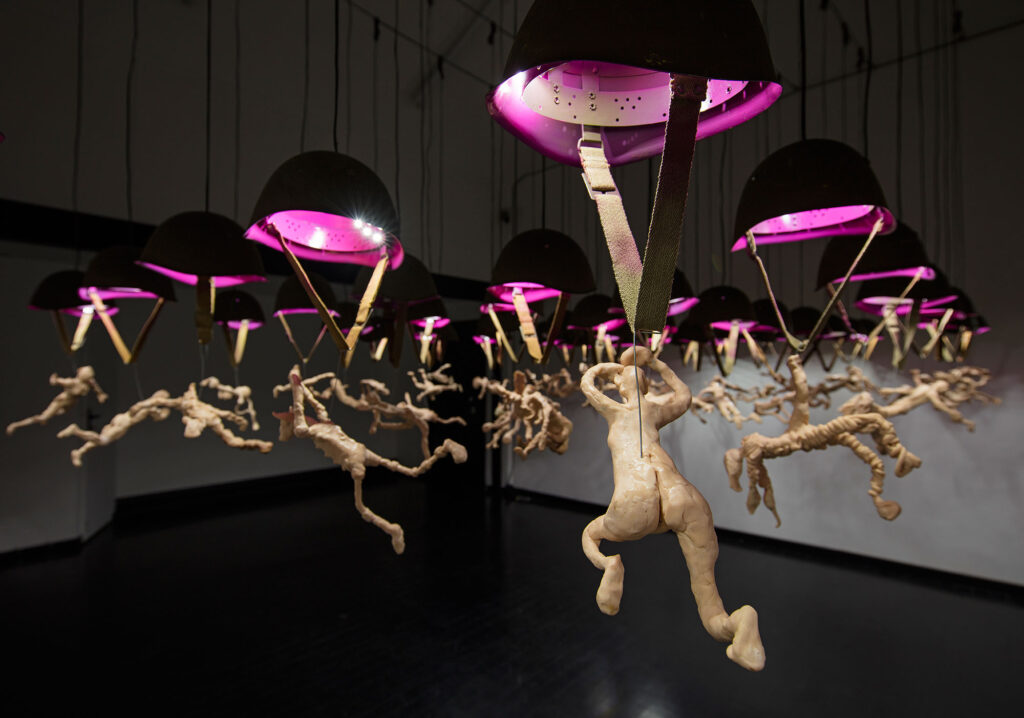 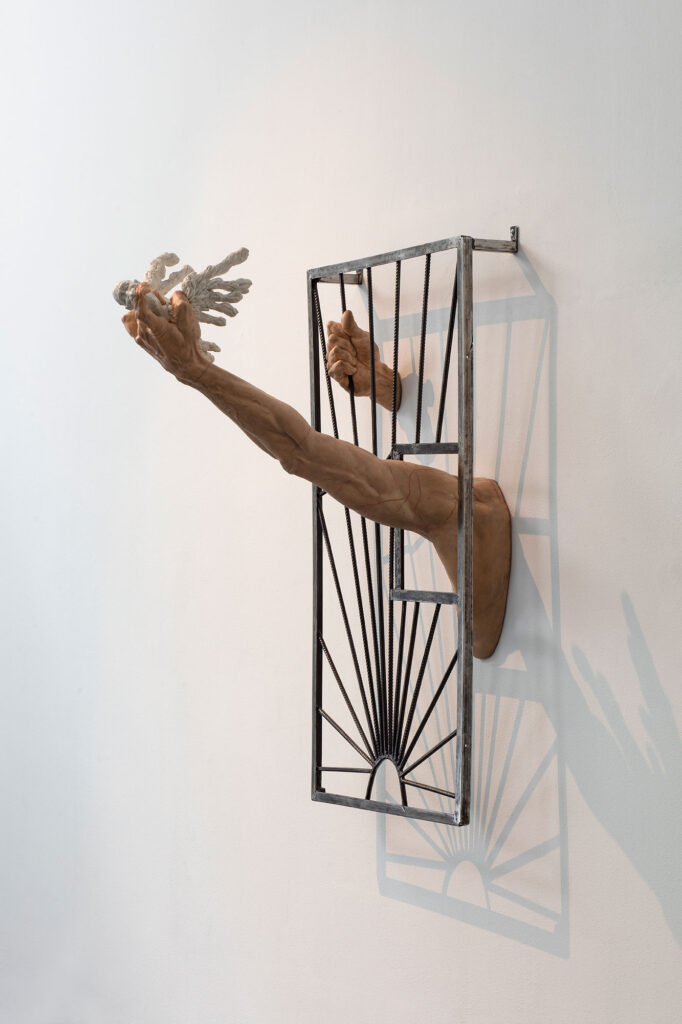 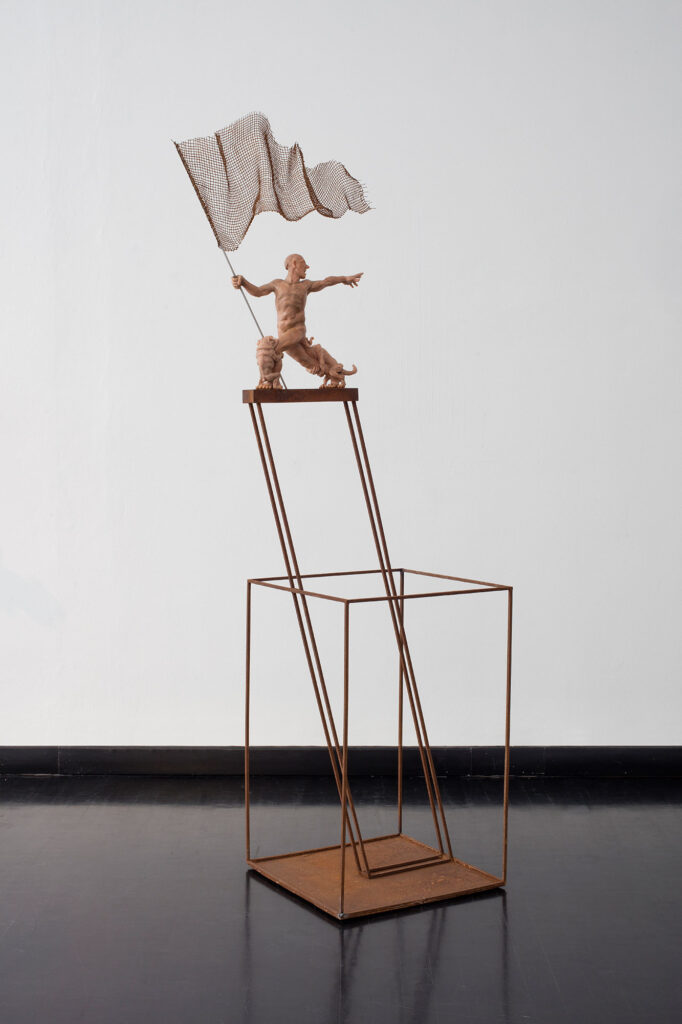 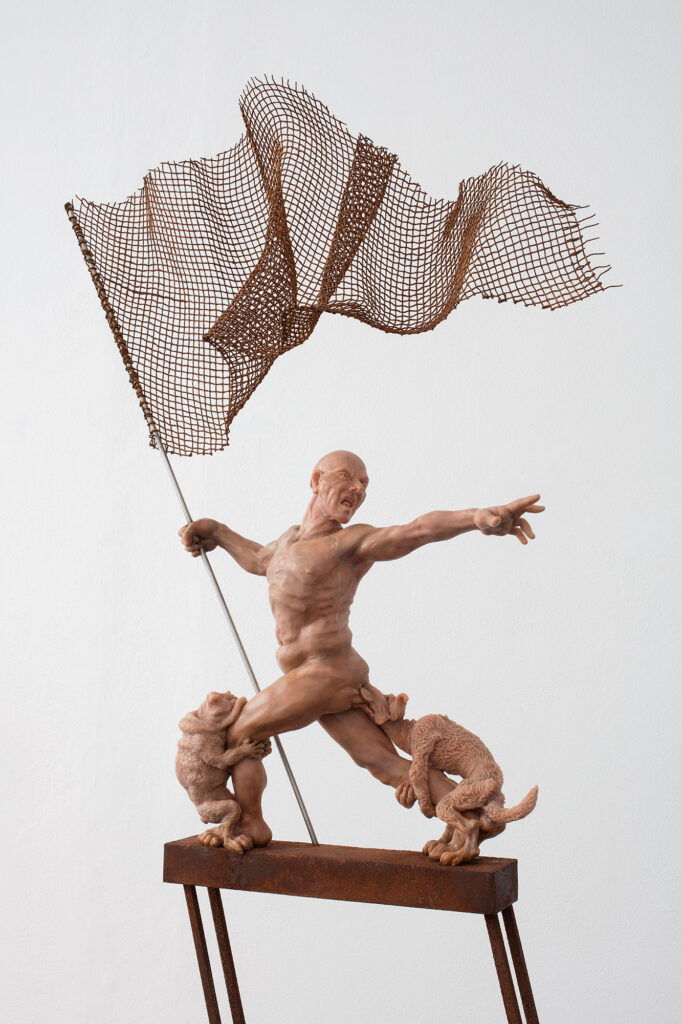